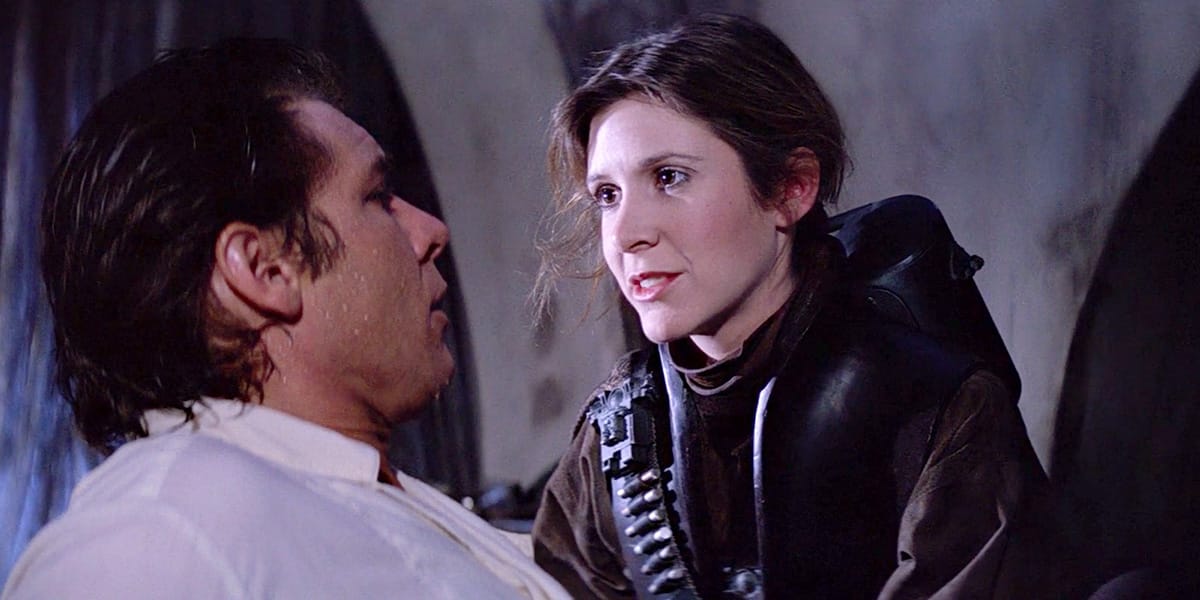 A huge part of the Star Wars franchise is Leia Organa. A princess turned general, she taught so many of us about ourselves and how we can be the heroes of our own story and she’s an important part of the world of Star Wars but for fans as well. So as we’re preparing for the celebration that is…well, Star Wars Celebration, and spending May the 4th with the series we love, it’s important too to look back at Leia and the moments that make her.

So from some of her greatest hits in the original trilogy and beyond, let’s talk about what makes her so special and why we love Carrie Fisher’s portrayal in celebration of May the 4th!

One of the biggest moments in Leia’s story comes not from her being a general or from her love story with Han Solo. Instead, it comes when she gets to rescue him. The first time we meet her, Han and Luke think she’s some damsel that needs saving. She doesn’t, she’s as cool as a cucumber but as the series goes on, they all rely on each other and slowly the men in her life realize how independent Leia is and how little she actually needs them.

But watching as she helps hatch a plan to save Han Solo from Jabba? That’s incredibly cool. Even in today’s world, we’re still lacking representation for women where we get to actually be the heroes and protect ourselves and so while Leia didn’t get fully there in the world of Star Wars, her saving Han and not the other way around in Return of the Jedi was a nice change of pace.

Ben Solo is a hot button issue. For me, I hated how Rise of Skywalker essentially made Leia die for Ben but what I do love about their relationship is that Leia never really stops hoping that her son will return to her. It’d be so easy for her to act as if her son was gone and that he would not come back to being Ben Solo but she doesn’t.

Maybe it’s because of her past and watching as her brother and her father fought with the dark and light sides of the Force or maybe it’s just the way that Leia is but seeing her continue to fight for her son and believe in him was inspiring in a shocking way. Leia Organa-Solo could have easily given up all hope about Ben after he killed Han and kept fighting as Kylo Ren but she didn’t because she believed in him.

Taking over as a General

It was truly inspiring as a kid to see Leia become a general. Not because women can (and should) be in charge but because it didn’t seem forced. Han was the pilot, Luke was the hero, and Leia was the one who knew how to rally the troops and keep everything in order. So her falling in line to being a general just made sense. And it makes sense that she goes on to follow in her mother’s footsteps and be a politician and everything about her story makes sense.

Obviously, the ending of Leia’s story in live-action is less than stellar but knowing that she was Force-sensitive and still fought for the rebellion on the ground instead of training worked well for her character and made a lot of sense for her as a character and it all stemmed from her becoming a general back in the original trilogy.

I am but a humble servant to the Ewoks in the world of Star Wars. On the forest moon of Endor, we get to see Leia befriend them and they help fight against Darth Vader, the Emperor, and their legion of Storm Troopers. Yes, I am a millennial so I love the Ewoks very much because, as a kid, they were just little teddy bears that I wanted to hug. But Leia did the work to gain their trust and it ended up helping them win in the fight against the Empire.

She could have easily brushed off their tactics and ignored them but she knew that the Ewoks could help her, Han, and Luke. So she befriended them and looked out for Wicket and it all, in turn, helps them in their fight. So it might feel like nothing but it is a big part of why Leia is such a great leader.

Mocking Luke for being short

The first moments we see Leia she’s holding her own against Darth Vader and mocking Luke Skywalker for being too short for a Storm Trooper. Absolutely iconic of her. When Luke thinks that he’s there to “rescue” her, Leia is laying on whatever bench the Empire has given her and her first comment to him isn’t “Oh thank god” or praising him for being a knight in shining armor. They’re making fun of him for being short and it’s beautiful.

Leia isn’t the type of character who is going to praise a man for doing something she could do herself. She’d rather be her own hero and it means taking down her “savior’s” ego a peg, she’d do it and it taught a lot of us growing up that we didn’t have to be a damsel. She wasn’t and I knew I never wanted to be one because of how we meet her.

The best reveal we got out of The Rise of Skywalker is that Leia is Force-sensitive. It makes sense, given that her twin brother is Luke Skywalker and her father was the chosen one, but we never saw it. Instead, it’s revealed that it wasn’t what she wanted to do. She had a family, a career, and she didn’t want to train and while I don’t agree with that choice by the filmmakers, I do like that she is Force-sensitive and makes her own choices.

With both Luke and Anakin, they don’t really have a choice. They have to train but Leia doesn’t and she decides to not and it’s oddly inspiring knowing that even when given the chance to be a Jedi, she chose her own path. I wish we could have seen the bit of training she did do with Luke more and that we could have explored it but I like that she, ultimately, made a choice but that doesn’t change that she’s Force-sensitive.

Holding her own against Darth Vader

Leia wasn’t afraid to stand up against Darth Vader when she met him on the Death Star and maybe it was because she’s the kind of woman who always held her own or maybe it’s just how Bail and Breha Organa raised her but Leia Organa didn’t hide away because it was Darth Vader. She stood and watched as he destroyed the only home she’d ever known and she didn’t let him see her weakness.

Leia could have cried out, she could have reacted but instead, she wouldn’t let him see her pain and she didn’t cower in fear like those who work for him did. And that’s pretty badass. She didn’t care about her own feelings, she cared about trying to save the Rebellion and that power that Leia had is what would drive her time and time again to do what was right for the fight and it’s what made her a great leader.

Han and Leia were meant to be and, for many of us, they were our first OTP (One True Pairing). And seeing them reunite in The Force Awakens is now bittersweet. The two were not together and still, their love for each other was clear as they were talking and trying to figure out a way to save their son. It didn’t have to be because they were married. If anything, I like that the two weren’t together anymore and had to fight to figure their dynamic out again.

But still, having them see each other from across the way and walk towards each other, clearly still in love with one another? That’s why we love Han and Leia so much. They’re a mess together but they care about the other so they try and make it work. C-3PO ruining it may be the worst thing to happen to me but at least the two clearly still cared.

Fighting with Han on Hoth

What’s cuter than little Carrie Fisher fighting tall Harrison Ford on an ice planet? For anyone who wasn’t convinced from A New Hope that Han and Leia were meant to be, they only had to wait until Empire Strikes Back to see the two of them fighting while trying to get to safety. It’s a whole sequence of events that make Hoth and their subsequent departure great for fans of Han and Leia but I just love watching Carrie Fisher yelling up at Harrison Ford and how he reacts to her.

He wants to fight back but Han Solo is such a puppy for Leia that he basically does what she wants anyway but their bickering is such like a married couple that it’s one of the reasons why they’re such a great fit for each other. Han Solo might be a “nice man” but Leia can see through him and still chooses to be with him and we love it.

Reminding us all rebellions are about hope

In Rogue One, Leia appears to remind us of one thing: Never give up hope. She’s fighting to save the rebellion and stop the Empire but she’s also the character we love to root for who will always keep fighting. She’s a warrior and she is the hope that so many need and while she’s trying to defeat Darth Vader and work behind the scenes, she’s still trying to be a hero and inspire others.

Leia Organa is a character who spent her entire life trying to be a source of comfort and a leader for people and she always was the hope. She’s the reason that Poe talks about hope in The Last Jedi. She’s the reason that Ben Solo comes to the light. And she’s constantly the hope that so many need in our real life to keep fighting. Leia represents a lot for fans but one thing we can all agree on is that Leia represents our hope.

More From Wealth of Geeks

This post was produced and syndicated by Wealth of Geeks.

Rachel Leishman is a writer based in New York City.  She specializes in yelling about her favorite properties. A real-life Leslie Knope, she loves her fictional characters and knows probably too much about Harrison Ford’s career.