How Much Does It Cost To Start a Billboard Business? 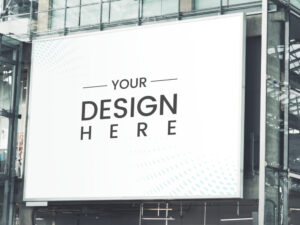 Billboards are one of the first and most successful advertising tools out there. And, it is currently a $6.5 billion industry. Although traditional advertising methods have all but died out with the birth of digital media, billboards continue to play an important role in advertising. They bring a high level of visibility for a relatively low investment and minimal upkeep. But if you’re looking to generate some extra income, you’re probably wondering “How much does a billboard business cost?”

How Much Does a Billboard Business Cost?

When it comes to owning your own billboard business, you have two options: buy an existing structure or build your own. Each one comes with its own set of pros and cons. Here are a few considerations when you look at how much a billboard business will cost you.

Once the billboard is complete, there are additional operational costs you must take into account. Some will be a one-time expense while others may be recurring payments.

The easiest option is to buy existing billboards, permits, and ground leases from an established company. But, the convenience will cost you. Since everything is already in place, the startup costs are much higher. However, if you want to see what your options are, you can contact a business broker to see if any billboard businesses are for sale in your area.

How Much Can You Earn?

The amount you can make directly depends on how much traffic the nearby road sees on a daily basis. According to AZ Central, even remote locations can generate $5,000 a month. Busier areas average about $20,000, and the most heavily trafficked sites bring in over $100,000. On average, billboard owners can charge anywhere from $800 to $5,000 a month to run advertisements. However, this amount is much lower in small towns ($200-$300) because there is less traffic and visibility.

The ideal locations are near busy expressways, highways, and major roads. But, they also come with a higher price tag which undermines profits. They begin to drop the further outside the city center you go. Even if a location does not have huge visibility now, it will gain more exposure in the future if it is near a growing city. A wise investment now could lead to good returns later on.

What Are the Local Laws?

Before you buy into the billboard business, you should brush up on the local laws. The federal regulations outlined in the Highway Beautification Act could also affect your operating costs. And, be sure to obtain the correct permits from the state’s Department of Transportation.

Local zoning authorities can answer all your questions about the legalities and billboard business cost in your district and surrounding counties. Be aware that laws vary by jurisdiction. In some locations, electronic signs are prohibited because of light emissions. Others have strict rules for display time and duration between ads. Knowing the restrictions ahead of time could save you from a costly mistake.

Although there are millions of billboards out there, industry consolidation has drastically reduced the number of competitors. Large corporations like Outfront, Lamar, and Clear Channel already have prime real estate and could make it difficult to find a suitable location. However, there is less competition outside major urban areas.

If you want to make your billboard business profitable, you need to know your competition. Not only will this help you set comparable rates, but it could also help you recognize opportunities when they come along.

Come back to what you love! Dollardig.com is the most reliable cash-back site on the web.  Just sign up, click, shop, and get full cashback!

Jenny Smedra is an avid world traveler, ESL teacher, former archaeologist, and freelance writer. Choosing a life abroad had strengthened her commitment to finding ways to bring people together across language and cultural barriers. While most of her time is dedicated to either working with children, she also enjoys good friends, good food, and new adventures.